Water in the desert

Deserts can be unbearably hot during the day and severely cold at night, sometimes even the snow whitens the sand. When we think of deserts, we are reminded of camel caravans, mirages and film performances of imminent deaths due to thirst. Endless sand dunes give the feeling of a terrible lack of water, but nevertheless, the water is present. If not elsewhere, below the surface. Mostly it needs to be dug or drilled deep to reach it, but sometimes it comes to the surface on its o wn. Oases with palm trees and other vegetation are formed. And Libya has a lot of groundwater in the Sahara. Really a lot.

Long before our time

There was a huge freshwater lake in the area around Sebha 200,000 years ago, as big as today’s Czech Republic. Lake Megafezzan, as it is now called by archaeologists, was fed by many rivers and streams of two river basins, and is next to Tritonis and Lake Chad one of the then megalakes in the area. Finds in the region testify to vibrant Paleolithic and Neolithic cultures.

As the tributaries began to dry up, the Megafezzan slowly evaporated and 100,000 years ago the Ubari sand field was formed. But not all the water disappeared into the atmosphere. Aquifers below the surface have formed lakes where the surface comes in contact with groundwater. Not mega-lakes as archeology knows them, but small and charming lakes surrounded by sand and fringed with palm trees and reeds. 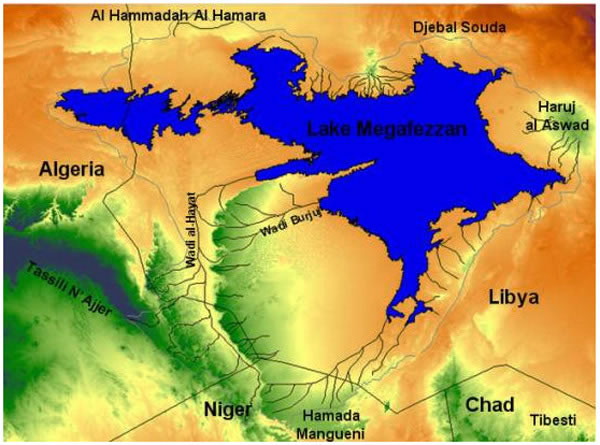 The name Ubari is not only given to a large sea of sand between Sebha, the rocky desert of Al-Hamra in the north and the Massak massif in the south. The name Ubari or Awbari is also a Tuareg-Berber town in the Valley of Life (arabic Wadi Al-Hayaa). The valley is named after its easy access to groundwater, and the main road runs through it from Sebha to the west to Serdeles and then south to the Ghat . Before reaching the town of Ubari, there is a place called Tekerkiba, from where there is the shortest access to the lakes among the dunes, whose common name is – Lake Ubari.

The group consists of more than 20 lakes, each with its own characteristics. Due to the combination of saline sedimentation and water evaporation, they are up to five times saltier than seawater, similar to the Dead Sea. If you plan to bathe in one of them, you can only avoid screams from the desert by skipping the morning shave. However, to avoid annoying stinging and itching after bathing, the skin should be washed with fresh water.

The depths of individual lakes vary from 7 to 35 meters. Some are intermittent, recharging only in winter or spring, but even those not always. Due to intensive groundwater extraction, there are more and more dry lakes. Salt-resistant algae give one of them its characteristic red color.

Usually tourists are taken only to the first four most easily accessible lakes – Mandara, Umm al-Maa, Mavo or Mahfu and Gabarun. Access to the others is only possible over high ridges of steep dunes, which takes more time and few vehicles more in a group.

The Mandara lake has been dry for a long time, and the bottom is full of wrinkled solidified mixture of salt and mud.

Umm al-Maa means Mother of Water. The name testifies to how important water in the desert is. It is narrow and elongated and perhaps that is why it is the most beautiful of the Ubari lakes. Despite its small size, Tuareg souvenir sellers settled there.

Aun’s tomb, which in translation means the name of Lake Gabar-Un, with an abandoned village on the north shore, is also beautiful. Depending on time of the day, the color of the water changes, from green and blue to red. It has several access points to the shore, and salty on the skin may be washed off at nearby well. A little care must be taken when swimming, as the water can be much hotter at a depth of one meter. There are also two campsites nearby.

Mohammed said he didn’t like spending the night here. I don’t remember anymore if he mentioned one of the more remote lakes, but he said he heard a quiet, ominous roar from the depths at night, and the ground shook.

The eighth wonder of the world - the Great Man-Made River

I mentioned earlier that predominantly desert Libya is quite rich in water. In the 1960s, oil was sought in the desert. During the drilling, they discovered large supplies of fossil drinking water in the south. It was estimated that it is tens of thousands of cubic kilometers (!) of water. As Libya is quite flat, they decided to supply this water to the most populated Mediterranean coast. Hundreds of kilometers of pipes were laid in the ground, 500 meters deep pumping stations and reservoirs were built in the hinterland of major cities. Gaddafi named the project the eighth wonder of the world.

The sinfully expensive project is now being criticized, as this water is expected to be used in 50 to 100 years to green some parts of the desert and supply the growing coastal population, and the same effect could be achieved with much less money by desalination of the seawater. 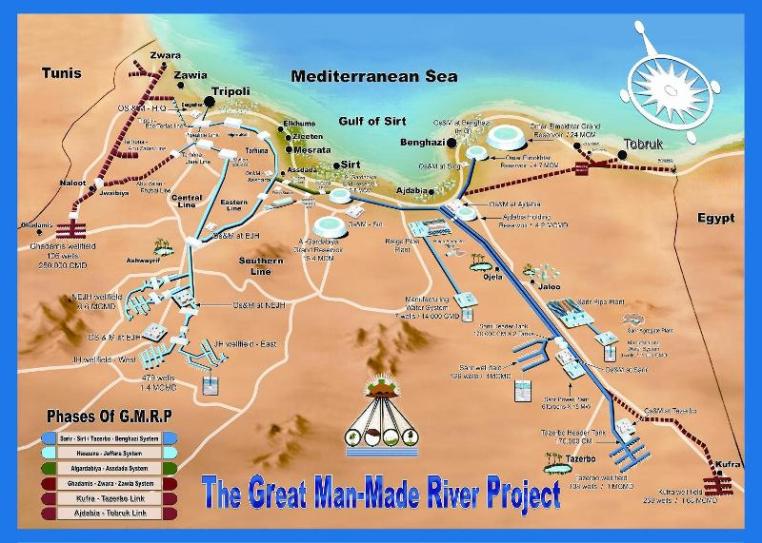