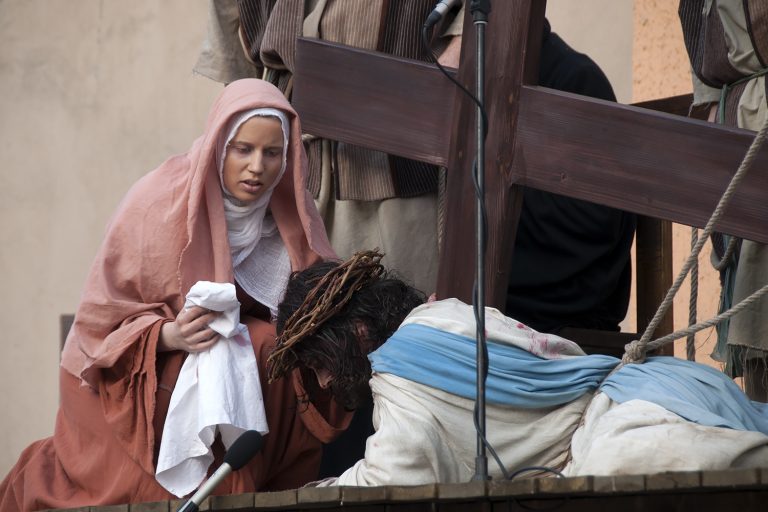 Lovrenc Marušič, originally from Štandrež near Gorica, came to Capuchin monastery of Škofja Loka around 1715 as Father Romuald. In 1720, the Loka Capuchins received permission to prepare a penitential procession in dramatic form, as took place on Good Friday in Ljubljana and Novo Mesto. There they were in German, and Father Romuald wrote the text for Škofja Loka in Slovene, and the directing records are in German, Latin and Slovene. This is how the manuscript with the Latin name “Instructio pro processione Locopolitana in die parasceues Domini” – “Instructions for the Škofja Loka procession on Good Friday” was created. It is considered to be the oldest preserved dramatic work in Slovene. Literary historians call it the Škofja Loka Passion Play.

The original manuscript is kept by the Capuchin Library in the monastery in Škofja Loka. The scenes of Father Romuald are: Paradise, Death, The Last Supper, Samson, The Way of the Cross, Whipping, The Coronation, The Penitent St. Jerome, Behold, man!, Christ on the Cross, Mother of the Seven Sorrows, Ark of the Covenant and the Lord’s Tomb. These 13 scenes of the procession were initially played by groups of locals moving on carriages, on horses, on foot, or on stages carried by a number of men. For several weeks before the play, the performers had been going to the preparations led by Father Romuald as the procession leader – magister processionis. There are now 20 scenes, with over 600 performers and 80 horsemen taking part at the four venues.

Since the text was written, Passion play has been staged annually on Good Friday, in second half of 18. century, however, it was abolished, probably due to lack of funds. The first performance after a long time was in 1936, after the independence of Slovenia it was revived in 1999. It has been on the UNESCO Intangible Cultural Heritage List since 2016, with performances scheduled every six years.

All photos are from the staging in 2009, more information about the Škofja Loka Passion can be found at https://www.pasijon.si/. Unfortunately, this year’s staging on the occasion of the 300th anniversary has been postponed to 2022 for objective reasons.